Now, before you call the health department, rest assured, he does still bathe, but he's switched to taking showers. All by himself. All of a sudden.

I can't even remember exactly when it happened. I just know that there used to be three little wet, wiggly ones in the tub in need of a scrub, and now there are only two, with one increasingly independent boy down the hall, singing to himself under the spray. For so long they were all in there together and now they're not, nor will they likely ever be again. It's just soap and water, but with it comes a tidal wave of independence that's sweeping through our house. And somewhere, lost in the shuffle, was one last bath.

Had we known it was going to be the last one, would we have done anything different? Added extra bubbles? Perhaps. Let them splash a little longer? Possibly. Saved a vial of tub water? Umm, have you seen our tub? I don't think so. But the fact remains, we didn't know.

Parenthood is marked by the celebration of so many "firsts." Look no further than Facebook for proof of that. Status update: Baby's first smile! Mobile upload: First taste of solid food! New album: First Day of School! But the "lasts" don't often get mentioned, much less "liked," because we rarely if ever know they're happening until it's too late.

Recently, I attended the wedding of a dear friend. As I watched the glowing bride dance with her father, I found myself overcome with emotion. She was so happy, he looked so serious. I was instantly taken back to a day almost a decade ago, when another ecstatic bride danced with her very serious father. Both were nervous- it was actually his first time on a dance floor, he had even taken lessons to prepare. But neither knew the twists that life and health would take, and that their first dance would likely also be their last. 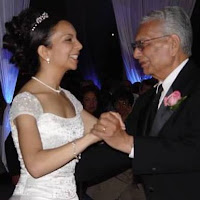 I don't think we're supposed to know when "lasts" are happening. If we did, we'd never have the strength to move forward, which is the only direction worth going. But perhaps just being a bit more aware that each "first" comes at the expense of another "last" helps us to appreciate the "during" just a little bit more.

Parenting is the most beautiful but also the most difficult thing I've ever experienced, and I think at some point, all parents have the feeling of wanting to hit fast forward and skip over a particular experience, or a tantrum, or a phase... or a year. "Just get me through the teething," we say. Or "If I can just make it until they're all in school all day." We look to the "firsts," the major milestones - we use them to pull ourselves up from the muck of daily life. But it's those "lasts," from the most routine ones that happen naked in a tub, to the ones that are covered in sequins and lace, that sneak up on us and knock us down.

There may not seem like that much difference between a shower and a bath, but for me there's a big reminder to be more aware.

Because all of this eventually washes away.
Posted by Mona Shand at 7:37 PM

Mona Shand
I've held a lot of different titles... including student, teacher, traveler, reporter, and now mom. It's that last one that's changed things most dramatically... mostly for the better, but I'll be the first to admit- juggling it all doesn't always bring out the best in me!